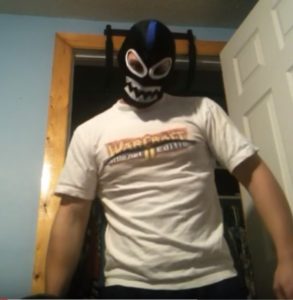 Continued updates on Combat, more server stability, and of course growth. Which are all changes I believe continue to happen anyways.

Taking some breaks from the game, especially before we lost ^Adam^

I use to kick Yamon from the main lobby channel just because I thought it was funny.

My game vs. Jon I will always remember starting out and getting decent rather quickly and winning against him while he was talking crap.
I believe we get along today though. 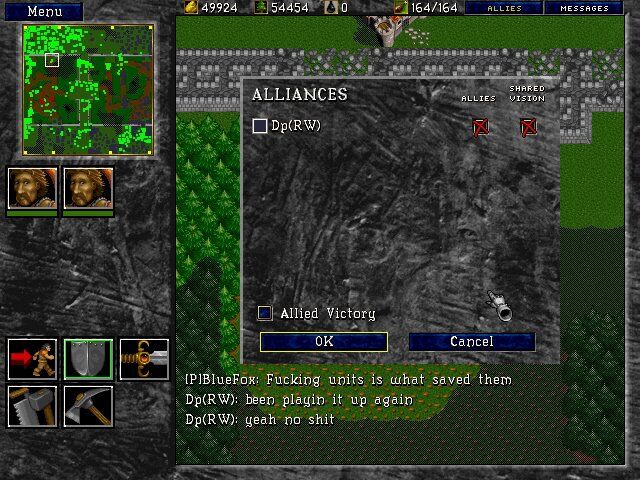 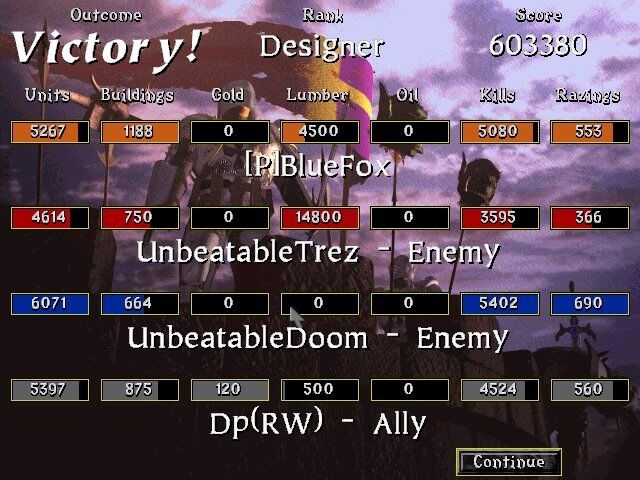 Beating my two biggest free castle enemies {RS}Doom & Trez while they had the names UnbeatableDoom and UnbeatableTrez. 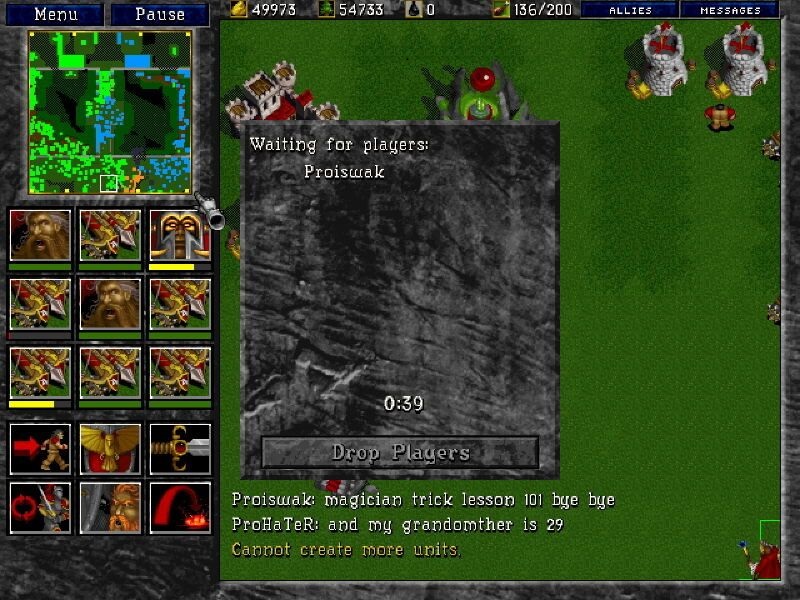 A really hard fought game with ProHaters and DA_Magician who were notorious maccing cheaters in Free Castles. Program where they press one button to build units from different buildings instantly. They got pretty good at it and were actually becoming a challenge to beat. Well beat them both with x)Hell(x_Dark a really nice dude. Was
one of my favorite games in my peak. (Oh yeah and they disc everytime they lost)

Had a lot of fun on the smurfs Eur0 and AfricanAmerican.

Also one really interesting game against Smurfette / and a ally forget who, and I forget who my ally was also. Use to have the screenshot think it is lost now. Anyways we were on the bottom of 007 castles map, and Smurfette was actually pretty good by that point. They were beating us.. I was thinking crap I am finally going to lose a game. Smurfette was one of those people that would always leave before the game ended though, so when I was close to being defeated I invised a peasant to run to the other side of the map. My partner had already left the game, and Smurfette left the game, I went from that 1 peasant to rebuilding and defeating her ally and winning the game.. THE STREAK CONTINUED! 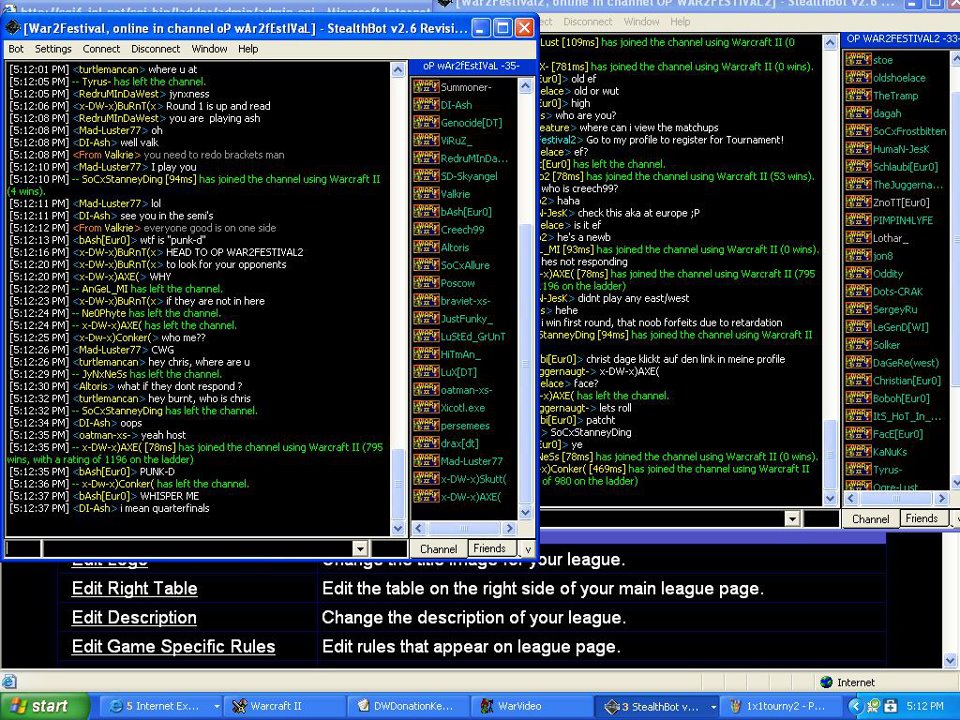 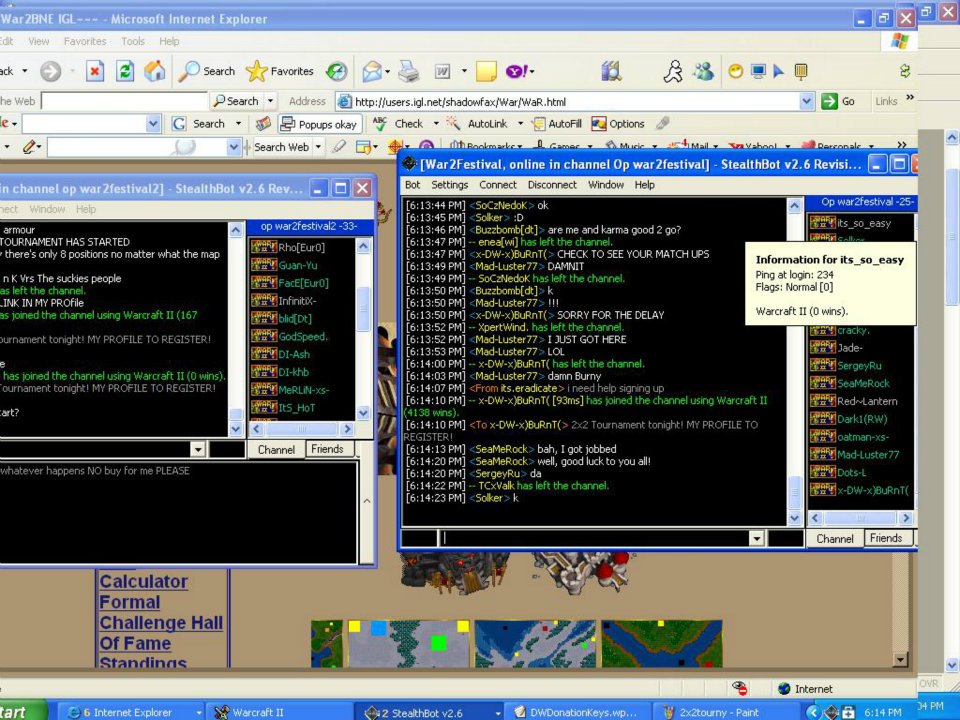 The original Warcraft 2 Festival was really memorable to me. Had two channels of players come to the USWest server for it, many who had taken breaks from the game, full of legends. Valkrie won.

Contributions to the game playerbase, and 214 skills.

I think I have a large part to due with Warcraft 2 even having a multiplayer serverbase still active today. I think if we continued on the official BNET servers then the cd key required could have killed off the game. Obviously I am only a small part in that though,
iL,Ldir,Kotz, whoever first started server and created the combat made it possible. Also other people who advertise and mousey's great site that continue the growth are up there too. Pushing for a server though I think I really made a change in how the history of this game went. Before I brought back a lot of the EF guys it was not even played much and I made a big part in getting Fastest players switching over to EF with all of my EF tournaments. Now it is pretty common setting again. That is a major way I changed the game that makes me memorable even though many probably don't realize it.

I got the name BuRnT from the DW leader Kozmo. He was tired of me making wrestling related names (5time, HBK) and named me BuRnT. I think it was a joke on me but I stuck to it and made a legacy out of it. Now I am XuRnT, that name I made because I sent the B with my friend ^Adam^ and to any other fallen players over time.

Not sure about all time, but I believe Viruz was the best on .RU.

Started in 2001 after seeing my friend play BGH Comp Stomp at his house. He burned me a copy of the game and we shared the same CD Key for awhile. Finally he bought another disc and we would go through a few clans together.

I would end up finding about Free Castles and spend 5-6 years of my Warcraft 2 "career" on those settings. I would eventually end up in the DW Clan which I would take over in 2004 and turn into the largest clan on the West Server for the later years having over 40 clan members in our channel at a time. I turned into a top castles player on my DW name and didn't lose a game in over a year with a 4,200-36 record.

From there I found the War2 Occult forums in 2005 and became intrigued with the history of Warcraft 2 and reading about its past. Taking alot of heat for being a custom map player alot of people told me I would never beat any of them on their settings ever. So from their I had some support from a few guys like Ganz, and Nedok who I first played BNE Map games with. I would practice on maps then compete in the IW2PL tournaments when I could.

Once ArchAngel ran his latest IGL league I was trying to get as many DW Clan members signed up as I could. Soon Arch quit and asked who wanted to take over so I was quick to respond and teamed up with Blid and Bam to keep the league active. Bam was always in the shadows but it was at this point I developed a nice relationship with Blid, who is probably the guy I talk to the most about this game now. We had tons of league activity with sometimes over 50 games played a day and tons of nice Tournaments. In the Summer of 2006 we had the first War2 Festival which was hosted on the IGL league with 59 players competeing in the $ Tournament winning $500. After the Festival things died down a bit and I was taking a little break from all of the advertisement I had been doing and just did a occasional tournament.

I was in talks with Ldir already for months about getting the USA Version of .RU up and running for the players with a nice ladder and a free download of the game. In August of 2006 we finally got the Combat up and running and we went through the test stages where I disapeared from the East and played with some newer players here for the upcoming months. November 2006 the website was complete and we had Nedok host a Tournament to kick things off. From there on .RU took off and we have had over 18,000 accounts made since then and hosted 3-4 Ladder Seasons. Summer of 2007 we hosted War2Festival II which resulted in a tournament with 44 Players and [TD]Wargasm taking home the cash prize.

Hosted hundreds of more tournaments and festivals. Helped continue to promote the game and made the biggest current Facebook group, and Youtube channel to help draw in traffic. Have started streaming. Not too much has changed, I have gotten a little worst, but who knows maybe I am yet to reach my peak!