On War2.ru it is mandatory to take screenshots on request during matches, and to upload them on our SS upload site immediately after the match ends.

We have this policy to prevent the use of third-party software (aka «hacks») that are designed to give players an unfair advantage over their opponents. You can request a screenshot from anyone, and anyone can request one from you. Anyone who fails to upload a screenshot on request will be subject to punitive action at an admin or mod’s discretion. 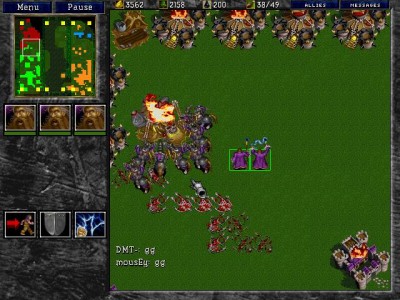 This is a screenshot (ru translation)

Screenshots are like photographs of your computer screen — they show exactly what you’re currently seeing on your screen at the time they’re taken. When you take a screenshot while playing Warcraft II it will look like the image to the right.

Screenshots are most commonly requested when someone is suspected of «hacking» — aka using unauthorized software to gain an unfair advantage during matches.

The most common form of hacking is maphacking, which removes fog of war from online games. There are other hacks such as build hack, which allows players to build advanced structures early in the game (e.g. a temple of the damned before upgrading the townhall). If you see someone buildhacking you can take a screenshot of the evidence in addition to an in-game /ping and submit it to a server admin to report the hacker.

When to Take Screenshots 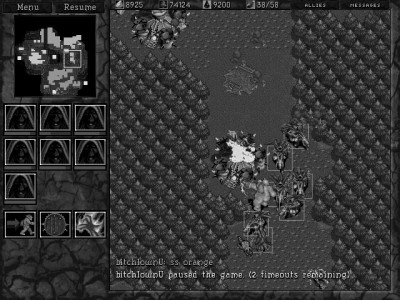 If your opponent pauses while you’re playing a game and says «screenshot» or «ss», this is a request that you take a screenshot. You should immediately do so, then reply with «done» or some other indication that you’ve taken the screenshot.

After the game is over, immediately go to ss.war2.ru and upload your screenshot, and let your opponent know when you have done so.

(Read the support article explaining how to take screenshots.)

When to Request Screenshots

In general, if you’re playing a game and your opponent appears to find your base unusually fast, or consistently intercept your units, or immediately finds all your expansion bases, this is grounds for requesting a screenshot.

If you request a screenshot and your opponent either does not reply, immediately unpauses, or outright refuses, then you can report them for failing to comply with a screenshot request by following the instructions here.

How to Request a Screenshot («SS»)

If you agree to record a Warvid before a game, you must provide the Warvid afterwards if requested. Failure to upload a promised Warvid will be treated the same as failure to provide a screenshot. As with screenshots, the requester should have proof of a person’s promise to Warvid if they plan to file a report.

If someone receives a ss request during a match they are recording with Warvid then they are entitled to provide the Warvid replay file (.dk2 format) in lieu of a screenshot to the ss requester.

In the past several years live streaming has become much more common among Warcraft II players. Live streaming transmits a live video broadcast of your computer screen to a 3rd party streaming website like Twitch.tv or YouTube which can be viewed by anyone in real time. Streaming allows anyone to see exactly what you’re seeing on your screen, which means any information recorded in a screenshot is also recorded in a live stream. For this reason, any player who is live streaming when they receive a screenshot request AND whose live stream is set to auto-archive (meaning the video can be reviewed for a period of time after the initial live stream ends) is considered exempt from taking screenshots on request, and may provide the link to the stream replay to the screenshot requester in lieu of the screenshot.

Excessive requesting of screenshots to be petty and inconvenience other players will not be tolerated.

How to Take Screenshots

If you don’t know how to take screenshots or where to find them on your computer you can read this detailed support article that covers all the specifics.